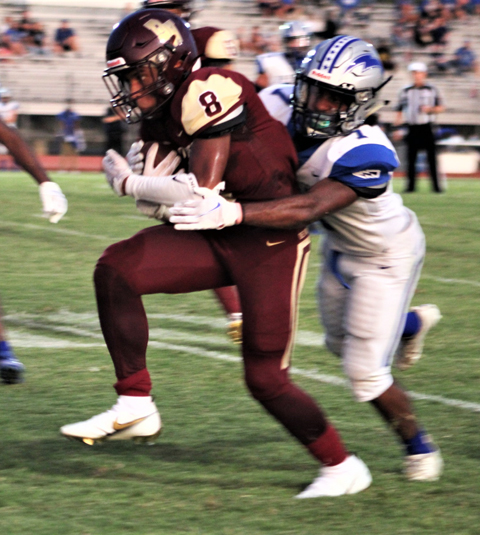 Devine won its second consecutive game last Friday edging Randolph 37-20 at Warhorse Stadium. The Warhorses look to continue their winning streak at home against the visiting Pleasanton Eagles this Friday night. Kickoff is set for 7:30pm.

“We are playing a tough Pleasanton team Friday and those guys are getting better every week,” Head Coach Paul Gomez began his weekly briefing on the Warhorses upcoming opponent. “When they played Hondo the first game of the year, they had three days of practice to prepare after being shut down due to Covid-19 positive cases on the football team.”
The Eagles have now had several practices to iron out many of the kinks they experienced in week one against Hondo. Last week with the benefit of more practices, Pleasanton played a more polished game against Jourdanton.
“If you see the game film on these guys they keep improving every week,” Gomez continued. “The Jourdanton game score is deceiving because at halftime the score is 7-6 and Pleasanton was holding a very good Jourdanton team in check. They gave up two big plays in the second half and had turnovers on their side of the field that turned the game in the second half.”
Pleasanton’s football coaching staff is much like Devine’s in the fact that losing does not set well with any directly involved in the program.
“Coach Liska and his staff have done a great job dealing with the adversity of being shut down for 14 days and coming back, keeping their players positive and motivated. I believe it’s going to be a great battle on Friday and our boys will be ready to go. We just need to take care of us. I think we will see a really tough Eagle team come here Friday.”
Don’t count on the Warhorses to rest on their laurels of the last couple of weeks either. Gomez stated, “Mentally and physically we continue to pride ourselves in outworking people and having a blue-collar mentality. We are excited to be playing this great game and our young men are ready to get to grinding.”
Gomez’s Eagle-eye
Coach Gomez and his staff spent the weekend breaking down film on their upcoming opponent. “Offensively, Pleasanton has a huge line,” according to Gomez. “They have some really big boys in the trenches and we are going to have to play aggressive and fast on the D-side. They have good receivers and their QB can scramble and make things happen. They have some tough running backs that do a great job of following their blockers and getting tough yards.”
Devine’s running game has taken off in a big way the last two ballgames. It should be a good matchup between the Warhorses beef up front against the size of the Eagle defensive line.
“Defensively they run a 50 defense. They are also big upfront and their linebackers are both very active. They try to put pressure on you every snap so our O-line has to be ready to go. They are very athletic in the secondary and did a great job covering Jourdanton’s spread offense.”
Gomez’s final plea is to have a repeat of crowd enthusiasm and positivity, just like Warhorse Nation has been the last couple of weeks at Uvalde, and again last week versus Randolph.
“We will need our fans to be loud on Friday at Warhorse Stadium!”
By Jerel Beaty
Staff Writer