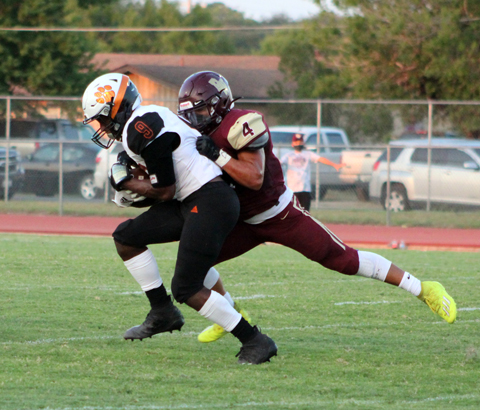 The Uvalde Coyotes are coming off an impressive 52-14 mauling of the Carrizo Springs Wildcats last Friday night in each team’s season opener. The Coyotes rushed out to a 31-point lead through the first half and never looked back. Uvalde’s 504 yards total offense led them to victory.
Devine travels to Uvalde in hopes of evening the Coyotes and their own records to 1-1. The Warhorses are trying to bounce back from their home-opening 36-7 loss to Refugio.
Devine Head Coach Paul Gomez knows that with great challenges come great rewards. Despitebeing a little banged up injury-wise last week, Gomez and the Warhorses are going into the game well prepared for victory.
“We went back to work Saturday and started preparing for a tough Uvalde team,” Gomez said.“Uvalde has a spread offense that loves to throw the ball around. Their QB is a slippery guy that does a great job scrambling around and then throwing it deep and going down field for a big play. They also have a very big offensive line so our defensive front has to bring their ‘A-game’ and win the battle in the trenches. We need to make sure our secondary keeps playing and covering and our defensive front needs to put pressure on their QB.We have to make sure we corral him and not allow him to get in space. They have a good-sized running back that does a great job of following his blockers and getting positive yards. Their offense can be dangerous and they have really good receivers.”
Carrizo Springs would second Gomez’s opinion about Uvalde’s dominant offense. Against the Wildcats, the Coyotes ran for a palpable 136 yards with Hunter Reimer leading the way with 13 carries for 79 yards, and one touchdown.
Big-play quarterback Donovan Davila completed 13 of 21 passes for a whopping 302 yards and 3 touchdowns as nary a pick was thrown. Wide receiver Christian Rivera caught six passes for 174 yards and was the recipient of three touchdown throws. Estavan Ortiz (5 for 86, 1 TD), and Ethan Luna (3 for 51) were two other main targets in Uvalde’s passing game.
If the Horses want to come out on top, there is no doubt the defense must be ready to play.
If Devine can get their offense on track and put together some long drives, maybe Uvalde will not have the ball often enough to put up too many points.
Gomez points out some of the Coyotes defensive strengths such as with their versatility saying, “Uvalde is multiple with a 3-3 stack and split so we have to be ready for any defense at this point. Refugio changed their defense on us and we did not do a good job of adjusting to it. We just need to trust our rules and go press the issue. Their defense does a good job running to the ball and making plays so it will be a good test for our offensive line and backs.”
Gomez likes what Uvalde has to offer his Warhorses, which is a chance to compete against good competition. He will not shy away from that fact.
“We are excited for the challenge and I’m anxious to see how we respond after a loss. We always talk about getting right back up after being knocked down and keep getting better. That’s our main goal for this week is to Get Better!”
No one doubts the Warhorses will to compete has been one of its trademarks for decades. Devine sometimes has started seasons on the wrong foot, but quickly regroups to put together championship-like runs.
By Jerel Beaty
Staff Writer