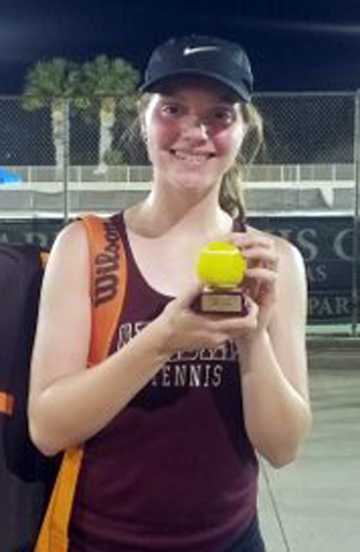 The Warhorses and Arabians Tennis Team competed in Brackenridge this past weekend and came home with some top honors including Tournament Champion for Brooke Runyan!
Doubles teams, Jake Harrell/Caeden Alvarez, Malvin Flores/Laurel Spannagel, Cameron English/Aidan Hildenbrand and girls singles Karma Herring all lost their quarter finals matches to very tough competition.
The tournament director changed the match format to 8 game pro sets, which can make it difficult to come back from a slow start and there is not much room for error. Even though these kids played their hearts out, they came up short of a victory.
Corwin Flores/Jordan Erxleben lost their first mixed doubles match which put them in the consolation bracket. They were able to win their way to the final match, but lost it to a talented Laredo United South duo.