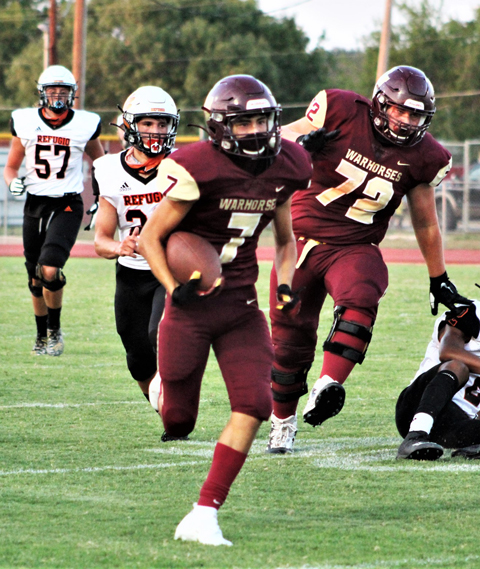 The Refugio Bobcats played the first of their ten scheduled away games this season last Friday night at Warhorse Stadium. If their play in Devine was any indication, the Bobcats will be in position to win yet another state championship as they went on to beat the Warhorses 36-7 in the season opener for both teams.
Warhorse head coach Paul Gomez said that even though the loss was a “tough one to take”, one can only wonder how the game would have turned out had things gone the Warhorses way in the early stages.
“There were a few plays that if they go the other way we are probably tied or have the lead and you never know how momentum would have affected the game,” Gomez stated about the lack of lady-luck being on his team’s side.
“Nate Ramirez had a long touchdown run that was called back because of a holding penalty, which if you go by the rules on blocking and holding, Mason Burford’s hands were inside the pads and when they separated he let go which technically is not a hold,” Gomez commented about one score that called back.
That would not be the only call to go against the Warhorses. Gomez said that on a screen play to fullback Buddy Santos, “On film it looks like a catch and not ground contact by the ball as what was officially ruled on the play. That play would have been a touchdown because there was nobody within 20 yards of him and he had three blockers ahead of him.”
Those two potentially incorrect calls could have amounted to 14 more points for Devine and given Warhorse players much needed momentum.
Instead, that lost momentum in a 7-7 game swung the Bobcats way as they went on to a 22-point second quarter, increasing their lead to 29-7 going into halftime.
Effort is never an issue with a Gomez-coached team. Friday was no different.
“We played hard. We gave up some big plays with missed assignments on defense, and didn’t execute well enough on offense. We were one block away a lot of times so we definitely need to clean that up,” Gomez said in relation to what was Friday night but will hopefully change this Friday in Uvalde.
Team stats
Total yards: Dev 216, Ref 457; First Downs: Dev 9, Ref 24; Rushes/Yards: Dev 44-198, Ref 27-208; Passing: Dev 3 of 8 for 18 yards and 1 INT, Ref 15 of 25 for 249 yards and 2 TDs; Punts: Dev 6 for 178, Ref 1 for 32; Fumbles-Lost: Dev 1-1, Ref 2-2; Penalties: Dev 5 for 50, Ref 6 for 65.
Individual Warhorse stats
Passing Brady Hackebeil 3 of 7 for 18 yards, one interception; Colin Dishman 0 for 1 Rushing Hackebeil 12 for 87 yards (7.3), 1 TD; Buddy Santos 16 for 73 (4.6); Gabriel Esquibel 5 for 21 (4.2): Ethan Santos 2 for 6 (3.0); Nate Ramirez 3 for 5 (1.7); Aiden Zapata 1 for 8 Receiving Mason Burford 2 for 6; Zapata 1 for 12.
Scoring recap
REF—Caleb Hesseltine 44-yard pass to Antwaan Gross (Alexander Placencia PAT), 9:51, 1st.
DEV—Brady Hackebeil 52-yard run (Jacob Featherly PAT), 3:05, 1st.
REF—Jordan Kelley 60-yard run (Placencia PAT), 6:19, 2nd.
REF—Hesseltine 40-yard pass to Ethan Perez (Placencia PAT), 3:25, 2nd.
REF—Gross 11-yard run (Perez two-point pass from Hesseltine), 0:16, 2nd.
REF—Zavien Wills 3-yard run (Placencia PAT), 2:45, 3rd.
Up next
The Horses travel to Uvalde to take on the Coyotes Friday night. Kickoff is set for 7:30pm.
By Jerel Beaty
Staff Writer