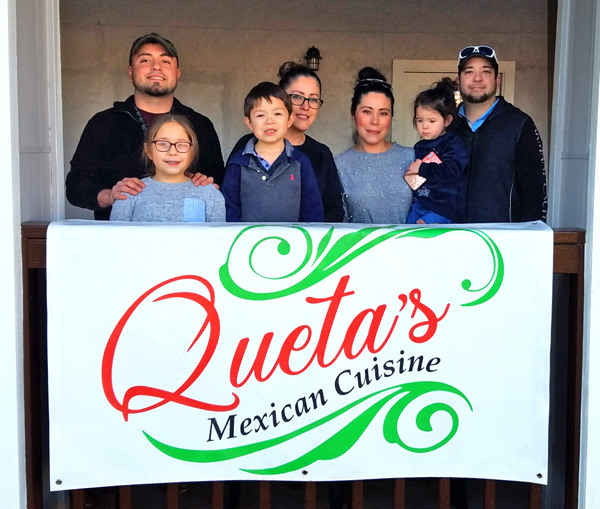 Kevin and Tere Sheeran and her siblings Jose and Carolina Mares are excited to announce the opening of a new restaurant in Devine. Queta’s Mexican Cuisine is located in the old Los Arcos building, and has been totally remodeled inside and out! They now have a drive-thru window too, located behind the building. They also offer delivery to area businesses.
Queta’s, named in honor of their mother Queta, is a family business with everyone pitching in–even kiddos Nicole, Kevin Jr. and Kaylee.

The new restaurant was plenty busy as they kicked off last Tuesday morning with their Grand Opening, and it’s easy to see why. They offer a wide variety of dishes including delicious Tortilla Soup, Enchiladas, Tacos, Mini Ttacos, Quesadillas, Hamburgers, Skillets of Fajitas and Steak dishes, Soups and Salads, and Shrimp Cocktail among other seafood dishes.
One of the favorite dishes features mama Queta’s famous Chilaquiles breakfast plate (fried corn tortillas simmering in red sauce and topped with melted cheese and sour cream, with a choice of chicken or eggs).
“We grew up eating mama’s chilaquiles for breakfast, a skillet of her fajitas for lunch,” they said, while preparing for the big opening.
Another favorite is their smokin’ hot skillet of Molcajeta Beef or Chicken Fajitas, served with sausage, shrimp, bell peppers, onions, and ranchero beans. Or you might want to try their Ribeye or T-Bone Steak Skillet, served with onion and bell peppers.
They serve plenty of breakfast dishes as well, and will continue to serve them all day long including Omlettes, Pancakes, Skillet Ranchero and more.
Don’t forget to try their appetizers including Guacamole and chips, Queso dip and chips, nachos, and more!
They also offer a kid’s menu for the youngsters.
In the next couple months, they hope to begin selling beer and wine as well as having live music.
For To-Go Orders call 830-663-8020 or come see them at 300 S. Teel Dr. in Devine (in the old Los Arcos building–totally remodeled). They also offer delivery to businesses in Devine and Natalia!