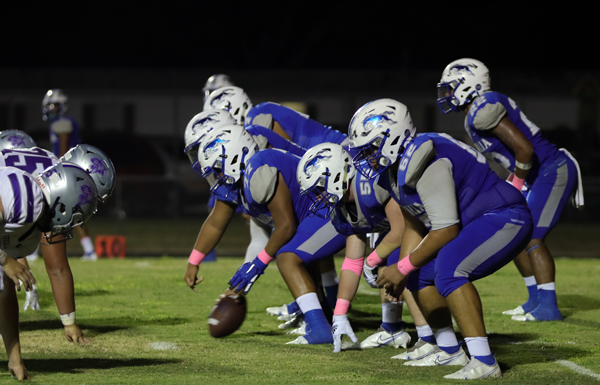 The Natalia Mustangs have secured their 4th playoff appearance in the past five seasons, but before the playoffs begin, the Mustangs have one final district opponent awaiting them Friday night. The Karnes City Badgers (3-6, 2-3) come to town Friday as they are coming off an upset loss vs. the Nixon Smiley Mustangs 34-33 as Natalia is coming off a tough lop-sided loss vs. state ranked and district champion Poth.
“We are looking forward to getting that bad taste of a loss our of our mouth, before getting back into the groove this Friday night,” Natalia Head Coach Ilyan Martinez said. “I am excited for our seniors to play their last home game and look forward to seeing the most prepared team we have had all season show up Friday.”
Karnes City Outlook
The Badgers have had their share of challenges this season, as they lost their head coach in the middle of the first part of the season. Coach Daniel Oelschlegl stepped down due to health reasons, as long-time assistant coach Donnie Dzuik has taken over.
The Badgers opened the season with a loss vs. rival Kenedy 18-13, before falling to Victoria St. Joseph 33-20. KC then beat Mathis 24-20, before falling to Three Rivers 41-21 and to Poth 48-0 in the district opener. KC responded with a 22-0 win vs. Dilley, before falling to Stockdale 48-33. KC then picked up a hard-fought win vs. George West 34-14 before last week’s disappointing loss to NS.
The Badgers were originally picked by most to be in the playoff mix, as they returned seven starters on both sides of the football from a squad that finished 4-6 overall and 3-3 in district a season ago.
“Offensively, they are running spread with a lot more two-back gun this season,” Martinez said. “They have a good QB Treyton Clark who has a quick release when he throws the ball and they have some skilled players that can make plays at receiver. Treyton can beat you with his feet and his arm making him a dual threat for our defense. Their bell cow is #4 Jeremiah Rivera as he runs the ball hard and never falls on first contact.”

“Defensively, they are running a split cover 3 defense,” Martinez said. “Interim HC Donny Dziuk (Former DC) does a great job of putting his kids in a position to make plays and they play sound football. They are young on defense, but their two sophomore linebackers #44 Rhett Hodges and #45 James Mejia really anchor their defense and make a lot of plays for the Badgers.”
“Their secondary is roamed by free safety #11 Warrick Thompson who has great size and range to cover a lot of ground while on the edges #1 Jason Foley is athletic and can make a lot of plays in space.”
Natalia Outlook
The Natalia Mustangs need to finish the regular season strong by doing what they have every game but two this season and that is not get in their own way. Natalia will need to go back to being the most physical team on the field, winning the war up front, forcing turnovers and not surrendering them and executing early and often to make an early statement.
We know we didn’t play to the level of expectation and to our ability vs. Poth, so KC is a great opportunity to correct our mistakes and get better heading into the post-season and that is exactly what we plan to do,” Martinez said.
While making sure they execute on both sides of the football, Natalia will also look to stay healthy as this game will not have an impact on the final district standings, although you never want to play a game safe a week before the playoffs.
Senior Night
As per tradition, following the game Natalia will have a special ceremony to recognize our 13 seniors as this will be most likely the final home game of their career (pending no home playoff game). Be sure to stick around after the game for this always awesome event.
Kickoff is set
Be sure to Come Early, Wear Blue, Be Loud and Cheer on the Mustangs in their home finale Friday night. Natalia can finish 8-2 on the season with a win vs. the Badgers before the road to the playoffs begins officially!
By Eric Smith
Staff Writer