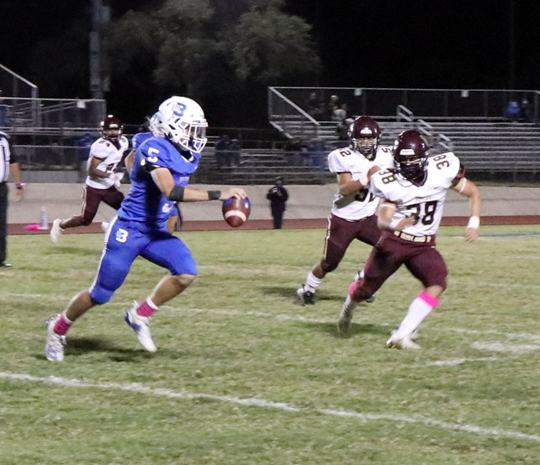 Devine looks to extend its district record to 3-1 Friday night against the visiting Pearsall Mavericks. Pearsall is coming off a 22-17 defeat to Carrizo Springs, a game in which the Mavericks led 17-7 at the break.

“We focus on Pearsall now,” Head Coach Paul Gomez stated after the Horses dominant performance against the Bandera Bulldogs last Friday. “The Mavericks really had some more opportunities to score against Carrizo but didn’t make the play when they needed to make it. So, I’m sure they have a sour taste in their mouths.”
“Pearsall is a young team that is getting better every week. They started playing late due to COVID so they have only played three games this season,” said Gomez about the inexperience of the Maverick team.
It would not matter how many games Pearsall had played coming into Warhorse Stadium. The Mavericks traditionally circle the date against the Warhorses every season.
“Pearsall believes that we are their rivals and they will give us everything they got,” Gomez continued on the town 22 miles up the road. “They always have for some reason. It will be a battle out there but if we just worry about us and take care of us, we will be fine.”
The Horses were focused in practices leading up to the Bulldog game. That focus does not need to slip as Pearsall looks for the upset.
“We have to have a great week of practice and really bring the energy. It will be our seniors’ last home game so we want it to be a memorable one for them! We will be playing for them on Friday!”
By Jerel Beaty
Staff Writer