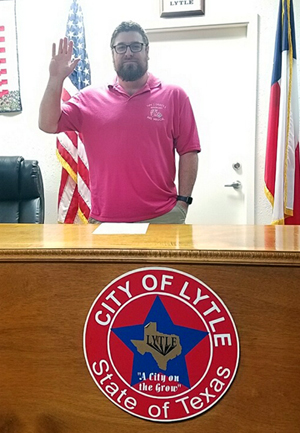 Joseph Morrow took his oath of office on Friday, May 28, 2021 as an Alderman for the City of Lytle.
Morrow will serve as the District 1 Alderman. He originally won the election, but offered to give it up to inumbent Lupe Catstro when two voters came forward and claimed they voted in the wrong election.
Mr Catro declined the position due to health reasons and encouraged Morrow to serve as he was voted in prior.
He will serve with Aldermen Charles Cate, Jerry Stone, Sam Cortez, David Emery and Mayor Ruben Gonzalez.