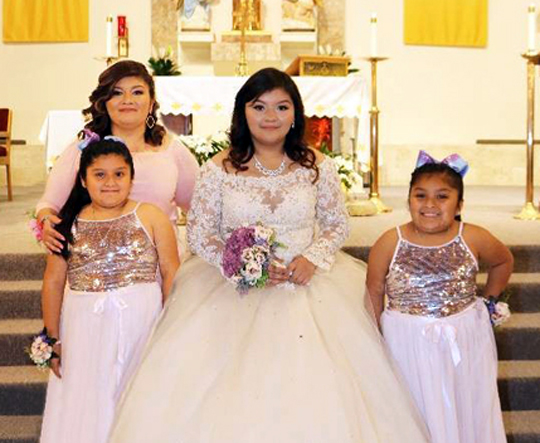 While the community continues supporting the family of kidnapping victim Jessica Sanchez and raising over $6,000 for Jessica’s girls, local law enforcement agencies are doing everything they can to get to the bottom of this tragic case that began in Devine at Jessica’s home on Fox Run when she was abducted at gunpoint in front of her three children, and instructed to tell them ‘goodbye’.
Law enforcement agencies will leave “no rock unturned” in this tragic case, said Medina County Sheriff Randy Brown.
According to Devine PD, more arrests are expected, related to the aggravated kidnapping and murder of Devine mother Jessica Sanchez.
“We believe other people are involved in this case,” Devine PD Lieutenant Chris Andrews said. “The investigation is ongoing. ATF (Alcohol, Tobacco, and Firearms) is now involved as well.”
“The gun used in this crime was purchased on the Friday prior to the abduction, and we were able to determine who purchased the gun, and obtained video footage of that transaction in San Antonio,” Lieutenant Andrews adds.
The Medina County Sheriff’s Office, Texas Rangers, US Marshalls, and ATF are also assisting Devine PD with this tragic case.
The community of Devine was heart-broken when the search for Jessica Sanchez and her abductor came to a sad and devastating end this past Tuesday, July 9th, nine days after it began. The two lifeless bodies were tragically found near Pearson shortly before 3:00 pm.
“It’s a sad day, we hoped and prayed for a different outcome,” said Sheriff Randy Brown after the discovery. “We expected the worst, but we prayed for the best. Now my prayers are for Jessica’s children and family.”
A Go Fund Me page to help the family has been set up, and friends and family have poured out their love, donating over $6,000 already as of this past Monday.

Jessica’s sister, Blasa Carrillo, wrote a nice letter in honor of her beautiful sister highlighting her passion for her girls, who were “her whole world,” and for photography and family portraits, a passion that she passed on to her oldest daughter. Jessica also had a passion for the medical field and helping others, especially when it came to taking special care of her patients, treating them with the utmost compassion.
“It’s very heartbreaking,” added Devine PD Lieutenant Chris Andrews in an interview last Tuesday. “The two lifeless bodies, believed to be Jessica Sanchez and Jorge Jaramillo, were found by a landowner near the area where the victim’s car was abandoned on June 30. Both families have been notified, and the remains were sent to the Bexar County Medical Examiner for positive ID.”
On Wednesday, June 10th, Lieutenant Andrews stated, “The autopsies were conducted today by the Medical Examiner’s office, and the preliminary cause of death for both individuals were gunshot wounds….The case is being investigated as a murder-suicide.”
Sanchez had received an Emergency Protective order this past May after she was attacked when she tried to end the relationship with Jaramillo.
“After the incident in May, he was arrested, and she got the Protective Order against him, and we changed all the locks on her house,” said Jessica’s sister, Blasa Carrillo, shaking her head, in an interview shortly before the Jessica was found. “We just didn’t think of the windows at that time…..we just didn’t think of the windows, and that’s how he got in.”
Jessica was a loving mother to three beautiful children, and so many in the community will miss her so dearly.
REWARD STILL BEING OFFERED
Devine PD would like to emphasize that Medina County Crime Stoppers is still offering a reward for information that leads to an arrest in this horrific case.
If you have any information about this case you can contact Medina County Crime Stoppers to share an anonymous tip by calling 1-800-367-2833. You do not have to give your name.
The Devine Police Department can be contacted at 830-663-4403 and the Medina County Sheriff’s Department (Texas) can be reached at (830) 741-6150.

Donate to the family
So many in the community would love to help, and the family has set up a Go Fund Me page where we can do exactly that. You may also mail donations in care of Jessica’s mom, Mary Ramirez, to PO Box 858, Natalia, TX 78059.
Aurdrey Danny Ramirez, who set up the Go Fund Me page, states, “We unexpectedly and tragically lost a beautiful soul– my sister Jessica Sanchez. Unfortunately this wonderful mother leaves behind three beautiful girls Jesslyn, Emma and Addy. The girls were their mother’s world and never went without. Jessica always made sure the girls had everything they needed and more. With such a tragic loss, and everything the girls have been put through, many of you have reached out and asked how you can help. If you would like to help by donating, this would help us continue to give the girls what they need as Jessica always found a way to make it happen. Thank you to everyone for all of your prayers throughout this difficult time.”
Services
The services for Jessica have not yet been scheduled, and the family is unsure of when they’ll be able to bring home Jessica for services at this time. Check online for updates on services.

A letter to Jessica by Big Sister Blasa Carrillo:
“Jessica was our youngest sister. Growing up out in the country, she was always attached to our mom and grandma (Ama). Like typical kids, we were always together…we had good times, fun times, and some sad times. My sister and brother would always dance together if we could go to any dances. They were dancing partners from the ages of five until they became teenagers.
“We had many fun times in the summer, playing in the canal that ran in front of my grandma’s house.
“Jessica had a great time during high school years. She played volleyball and softball and had many friends, and she also worked in Devine at Alco. She graduated from Natalia High School in 2000.
“After high school, she went to school to become a phlebotomist. She stayed in the medical field for the rest of her adult life. She also had a passion for photography.
” Jessica and my mom drove to Illinois to see my first son be born. My son became very special to her as to me. She loved each of her nieces and nephews, taking many pictures of them from graduations, birthdays and sports. She made them all feel special.
“When her daughters came into her life, they became her world. When her oldest daughter came, she was so in love with her. I read a letter that my sister wrote to her oldest daughter expressing her love for her, how she would always protect her, show her love, and how they would always have mother and daughter days. They had a lot of mother daughter days.
“My sister and her oldest daughter, Jesslyn, look just like twins, so much alike.
“The coming of the twins was a great surprise. I remember getting a phone call from her asking me how she was going to do it, having twins. I told her the Lord knew she could handle having two babies at one time. I was very grateful to move back to Texas with my sons to be here in time for the twins to come.
“Times were hard but we all jumped in to help, especially our mom. Our mom has always been a caregiver for my sister’s three daughters. My sister loved all of her daughters very much. She always made sure she told them how much she loved them. She showed the girls how to be respectful and have great manners. She had the girls in many activities, including cheer camp, basketball, volleyball, softball, and dance.
“She was also a great Spurs fan and loved #20, Manu. She attended many games and watched them on T.V. She loved #20 Manu so much she named one of the twins Manulani for a middle name. She always had on a Spurs outfit of some kind.
“She was great at her job making many patients feel comfortable, to the point that some of them would call before going to their appointment. If she wasn’t there, they would not go in. She also made many friends in her work environment.
“She always put her family first before anything else. She was a helper of many in any way she could help and got it done.
“I did my sister’s nails many times and that was our special time together. We had many talks about her daughters and the silly things they did. She always hugged and loved on the girls, even while she was getting her nails done. Our one hour nail appointment would always turn into two hours, or sometimes even longer, and I always enjoyed that time with her ¬¬¬and the girls.
“Growing up, I never called her “sister” until I moved back to Texas nine years ago, then we started calling each other ‘Sister,’ instead of calling each other by name. When I called her ‘Sister’, she always had a big smile.
Sister, I love you so much and I feel I didn’t tell you enough. Love you always and forever, Sister.
Your big sister,
Blasa