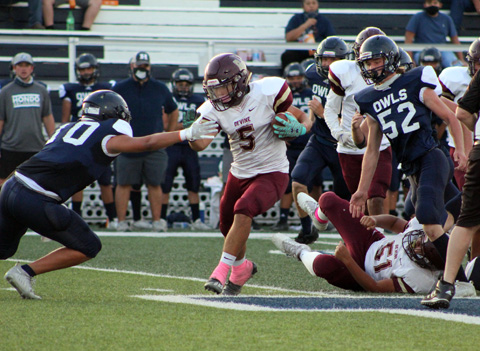 The JV Warhorses cruised to a 27-0 victory in Hondo last Thursday as four different players scored touchdowns throughout the ballgame. Samuel Guardiola, Elijah Sanchez, Jonathon Weinkam, and Blain Davis all reached pay-dirt while Sanchez added a two-point conversion and Caden Hanson booted an extra point.
The victory pushed the JV record to 5-2 on the season and 2-0 in district.
“I am very pleased with our effort on both sides of the ball,” Coach Heath Poppe stated. “On offense, the goal was to keep their offense off the field by us getting those tough yards and running the clock. The running back crew of Blain Davis, Brandon Martinez, Aaron Bonilla, Jonathan Weinkam, Elijah Sanchez, Luke Friesenhahn, and Noah Fernandez did a great job taking care of the football all night.”
With several backs getting the opportunity to share the carries, it was important for the offensive line to perform their job well.
“Our big boys up front did a great job of mashing them up front considering we were outsized. Lalo Hernandez, Jason Costilla, Kolt Hackebeil, Xavier Garza, Wyatt LaFond, Seth DeLeon, George Saenz, Julian Gonzalez, Jacob Delaney, Adrian Beltran, and Corey Dirck were forces to be reckoned with,” Poppe said about his determined front five, or eleven since all played and all contributed.
The Horses pitching a shutout on Hondo’s home turf says a lot about the effort that side of the ball gave as well.
“Defensively, we were very stingy and never really allowed Hondo to get anything started. Aaron Saenz and Nick Ortiz had great games at linebacker. Colt Hackebeil had a great game at defensive tackle with a sack and several tackles for losses. Luke Friesenhahn also had a great game with a sack. Aaron Bonilla, Blain Davis, and Seth Deleon played extremely well making sure things were contained. We only gave up six first downs all game long. I am extremely proud of them,” said Poppe.
Scoring summary
DEV—3:13 1st quarter, 33-yard run by Samuel Guardiola, 6-0.
DEV—5:12 2nd quarter, 4 yard run by Elijah Sanchez, 12-0 (set up by a fumble recovery by Blain Davis on the Hondo 4-yard line and great punt by Caden Hanson).
DEV—9:13 4th quarter, 3-yard run by Jonathan Weinkam, 2-point run by Elijah Sanchez 20-0.
DEV—5:44 4th quarter, 42-yard run by Blain Davis, extra point kicked by Caden Hanson 27-0.
By Jerel Beaty
Staff Writer