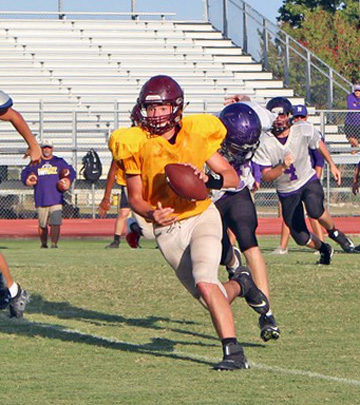 The JV Warhorses stumbled a little bit against Navarro in their final tune-up before Thursday’s home opener against San Antonio Kennedy at Warhorse Stadium. The Panthers topped Devine 4 scores to none.
“The JV in general did not enter scrimmage with the right mentality,” stated defensive signal caller Coach Scott Taylor. “We had a great week of practice that didn’t carry over to the live scrimmage for some reason. These young men will soon realize they are not freshmen anymore and that the mental part of the game becomes a bigger piece of the equation to a team’s success.
Defensively when we trusted the keys and played with intensity, we made stops. When we did not do those two components, we gave up big plays. Missed tackles also hurt us.
We will continue to work hard and improve. All three linebackers Robert Ramirez, Hayden Brummage (who also played defensive end), and Evan Rico along with DJ Dzierzanowski and Kannon Ramirez (who also played defensive tackle and defensive end) did some good things.
There are plenty of bright spots on this team. We just have to play better.”
By Jerel Beaty
Staff Writer