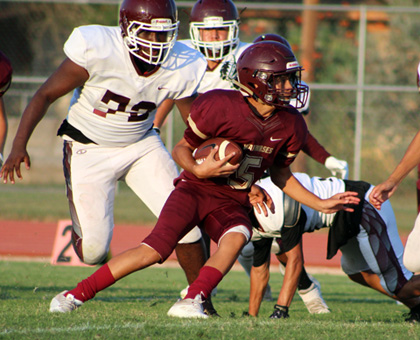 The JV Horses pitched a shutout in the season opening 14-0 home victory over the San Antonio Highland Owls last Thursday evening. Devine’s ball-control offense put together two long scoring drives to turn an 8-0 halftime lead into a 14-0 win.
With neither team able to find the end zone after one quarter of play, the Horses culminated a 71-yard drive with an Elijah Sanchez 19-yard touchdown run. Wero Torres ran in the two-point conversion to give Devine an 8-0 lead with 9:38 to go until the halftime break.
Devine used much of the third quarter clock and ten seconds of the fourth quarter as Evan Sanchez converted a third down and three yards to go into a touchdown. The Horses ate up nearly nine minutes off the clock on this scoring drive.
A defensive stand inside the twenty-yard line preserved Devine’s 14-0 shutout and season-opening victory.
“We had an ‘OK showing’ last night,” according to offensive signal caller Coach Heath Poppe. “I thought our backs ran hard with Jose Morales, Wero Torres, Evan Sanchez, and Elijah Sanchez. At times we missed the true running lane, but that is expected early in the season.”
The backfield ran hard, even when they did not seem to find the crease. They took the liberty to run over or through opposing would-be tacklers and did a fantastic job holding onto the football as no fumbles were recorded in their run-dominated offensive attack.
“Our quarterback did a good job running the huddle and helping other players with their play responsibilities, even though there were a few hiccups along the way,” Poppe stated regarding Jonathan Weinkam’s first-game evaluation.
Tight ends Corey Dirck, Trinidad Hernandez, Miguel Bedoya Posada, Luciano Rodriguez, and split out Samuel Mills performed their blocking duties admirably most of the evening. However, Poppe gave his final shout out to his offensive lineman.
“Seth DeLeon, Jonathan Hzyer, Charles Key, Kolt Hackebeil, Richard Hernandez, Wyatt LaFond, Adam Guerrero, and Cesar Fuentes did a good job last even with the occasional missed assignment,” Poppe said about his down lineman. “Again, like I said in reference to the backs missing the hole at times, this offense is also new to the linemen. We expect a few bumps in the road to improvement.”
With a game-one two-touchdown showing, the Horses look to ramp up their offense in the coming weeks.
“Even though it isn’t new to us coaches, this team will eventually be a well-oiled machine. This JV group has an amazing work ethic!” Poppe said in closing.
Defensively, no one is sure how a unit can do much better than shutting out an opponent their first game of the season.
JV Defensive Coordinator Evan Eads was impressed with the shutout but knows that there is always room for improvement.
“The JV D flew around last night,” Eads said in reference to his squad and their overall pursuit and tackling of Owl ball carriers. “We had to make a few adjustments to Highlands offense on the fly, and we handled it well. Several kids are playing multiple positions which could lead to some hesitancy, but the kids are still being successful just by playing hard every snap.”
Not everything can be rosy the first time out, or there would not be a need to continue practicing. “We do need to improve on tackling,” Eads said. “However, a shutout is a good accomplishment to begin the season.”
Next up
The JV travels to San Antonio to take on Memorial at Mata Stadium Thursday, September 2. Kickoff is set for 5:30pm.
By Jerel Beaty
Staff Writer