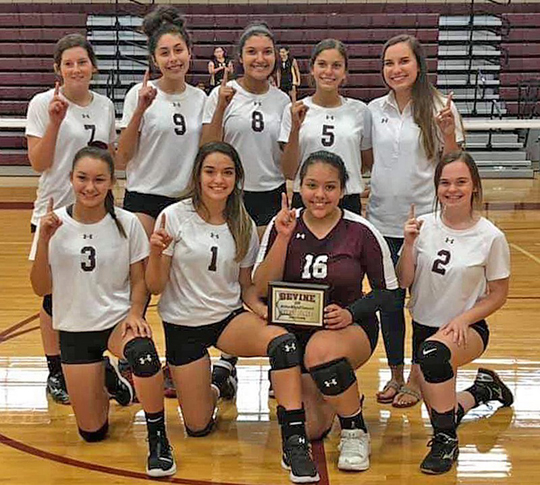 JV Arabians swept their home tournament and kept the first place trophy at home. This big tournament puts their record at 7-3. They only have two more games until district starts on October 1st against Carrizo Springs.
Coach Kailee Ramirez and her team faced Poteet in pool play first and won in two sets at 25-20 and 26-24. The second set was a little tougher and the Arabians proved they wanted the win more than the Lady Aggies.
Uvalde was next up in pool play and the Arabians won the first set at 25-23. The Wolves bit back and took the second set at 25-20, but it was in the third that Devine really stepped up and win 15-11 to put them in the championship game.
In the last game against Lytle, the Arabians continued their winning streak and beat them 25-21 and 25-14 earning them the first place trophy!
“They defeated Lytle in two sets in the championship game and got first place. Our hitters were on fire during the championship game. They were being smart about where they were putting the ball and our back row was doing a great job at getting the ball up so that we could run plays. CeCe Martinez was on fire with her serves during the game against Lytle as well. They set a goal to win championship and I am happy that all of their hard work paid off!” Coach Ramirez said.
The JV Arabians will head to Floresville this Friday, Navarro for a tournament, and Antonian for another away game.
By Dicy Chambers
Sports Writer