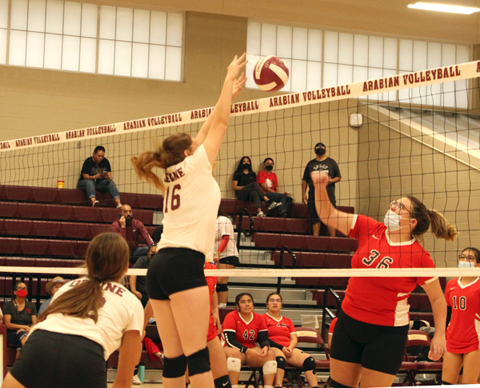 In their final game of the season, the JV Arabians took down Fox Tech in two sets at 25-8 and 25-12. This win put them undefeated at district at 8-0 and 20-7 overall. “We did a great job of serving tonight and being aggressive on offense. This team did a great job of improving throughout the year, especially while a lot got thrown at them. I’m looking forward to these girls helping the program in the next couple of years,” said Coach Leigh Anne McIver.
Karsyn Brown 5 aces, 6 kills. Neenah Guerrero 3 digs, 3 aces. Kaylee Romana 3 digs, 1 ace. Kate Featherly 5 assists, 2 kills. Makayla Rivera 1 dig, 1 kill. Denise Contreras 1 dig, 3 kills. Kelsey Dishman 1 dig, 10 assists, 2 aces, 3 kills. Avery Cruz 2 kills. Maddie DuBose 3 kills, 1 block.
The Arabians will head straight into basketball season and will face Falls City on November 9thand then Lytle November 16th. Both games are at home.
By Dicy Chambers
Sports Writer