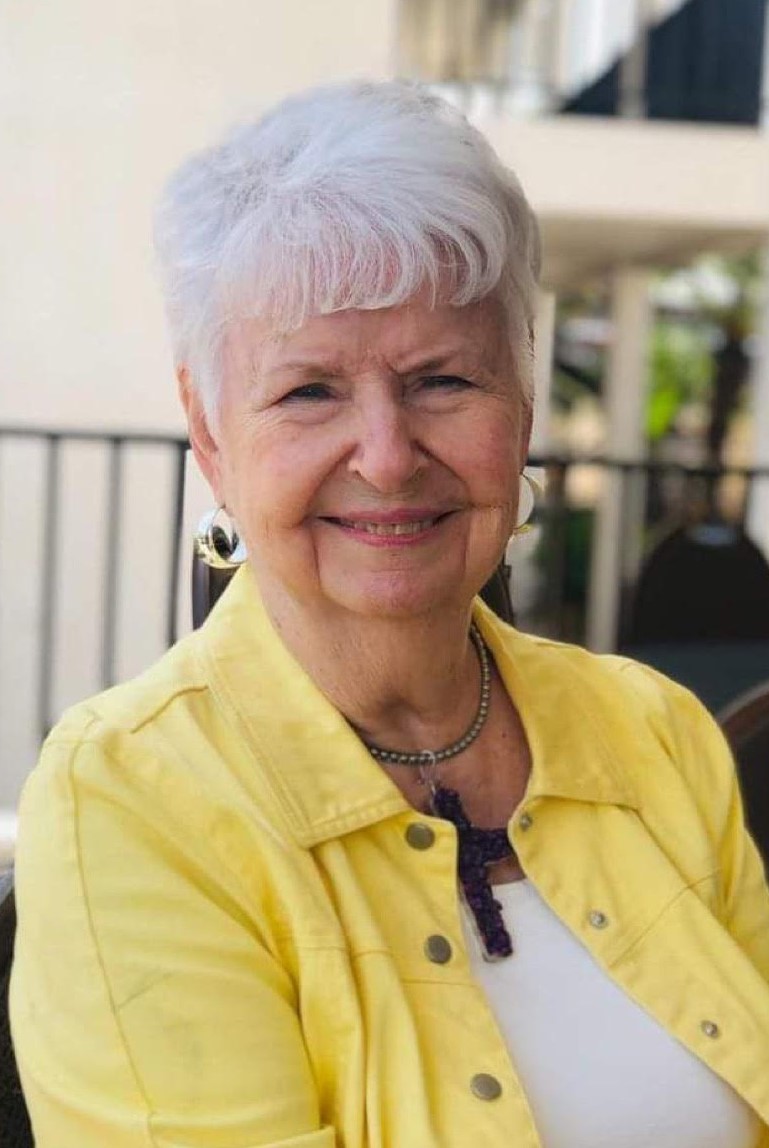 Carolyn Ellis Wright went to meet the Lord on June 7, 2022. She was 88 years old.
She is preceded in death by her husband, John Emory Wight, and her son, James Ellis Wright.
She was born on April 9, 1934, to Rufus Ellis and Minnie Paden Fowler in Vicksburg, Mississippi. At age 8 she and her mother moved to San Antonio, where her mom began a job as a switchboard operator in Natalia, Texas. Carolyn went to Blessed Sacrament Boarding School until age 11, where she loved the Catholic nuns that taught her so many wonderful things. She then attended Edgar Allen Poe Junior High and later graduated from Brackenridge High School in 1952. After graduation, she worked at Joske’s Department Store downtown.
One summer’s evening she met her husband John (Jay) Emory Wright at a Hermann Son’s dance in San Antonio. For two years they dated while Jay finished college at Texas State University. After marrying, they moved to College Station where Jay received his Master’s degree in Ag Business and their first born child, Mary Suzanne, was born at that time. After graduation, they moved to Kyote, Texas, where Jay began teaching and Carolyn was a stay-at-home mom for six years.
Then in 1966, she joined Jay at Charlotte ISD as a teacher’s aide for two years. She then decided to get her teaching degree and attended San Antonio College and graduated from Texas State University in 1972. Seven months later, their second child, James Ellis, was born in Jourdanton, Texas at the Mercy Hospital. Shortly after, Carolyn began her teaching career by opening the first kindergarten at Jourdanton ISD. She taught kindergarten there for 30 years and then retired to travel with her husband, Jay.
In 2007, she helped start Our Lady of Grace Catholic school teaching kindergarten in a renovated 3-bedroom house with 30 students in attendance. She continued to help and build that school by serving on the school board for the last 15 years, but also by offering advice and buying many supplies that were needed, such as educational games and manipulatives. She also substituted whenever they needed her. Today there are 65 plus students in attendance at Our Lady of Grace Catholic School in Pleasanton, and that place was her pride and joy!
In the meantime, though, she substituted for the Jourdanton ISD in the high school for approximately 15 years also, teaching many of the same students she taught in Kindergarten so many years prior. She was still substituting up until she turned 82. The last few years she spent a lot of her free time playing in Dominoes and Bunco groups and enjoying her beautiful cattle ranch in Kyote, Texas. Even so, she missed substituting a lot in those schools because teaching was the love of her life.
She is survived by her daughter, Suzanne Muennink, two granddaughters, Karla Bedford, and Kourtney Muennink, and also by two great granddaughters, Kallisyn and Brittyn Bedford.
A visitation will be held on Monday, June 13, 2022, at Hurley Funeral Home – Pleasanton, from 2:00 pm to 9:00 pm, with a reciting of the rosary at 7:00 pm. A mass will be celebrated on Tuesday, June 14, 2022, at St. Matthew Catholic Church, starting at 9:30 am, followed by interment at St. Joseph Cemetery in Devine, Texas (Corner of Colonial Parkway and Cemetery Lane).