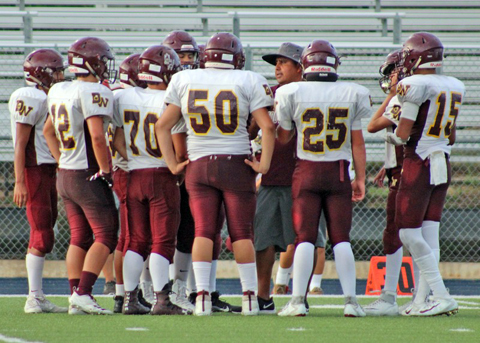 The Freshmen Warhorses were not able to hold onto a six-point halftime lead over the Bulldogs last Thursday in Somerset. A 20-yard scoring run and subsequent two-point conversion by Somerset erased a 20-14 Warhorse lead, propelling the Bulldogs to a 22-20 victory. The Horses are now 1-1 on the season.
Devine held the lead for most of the night, striking the end zone first on a 45-yard run by halfback Marcus Rodriguez. Quarterback Jaiden Burford ran in the two-point conversion to give the Warhorses an early 8-0 advantage.
Camden White streaked down the sidelines on the ensuing kickoff and recovered the bouncing football to give Devine another possession. Burford later converted that recovery into a 6-yard run, giving Devine a 14-0 lead.
Somerset snuck back in the contest, scoring from 1-yard to put the Bulldogs down by only 8 points.
Rodriguez rambled 46-yards for the Horses on their next possession to bump the lead to 20-6. That was Devine’s last score, however.
Somerset closed the first half with a three-yard run and two-point conversion to get within 20-14. The Bulldogs game-clinching touchdown came in the fourth quarter on a 20-yard run. The two-point conversion untied the 20-all game, pushing Somerset to the 22-20 win.
Coach-speak
“Blain Davis did a good job blocking at the fullback position, and Jaiden Burford connected twice with Aiden Zapata who had 18 yards passing and receiving between them.
I was very pleased with our offensive line’s blocking execution. Camden White also had an interception in the end zone in the second quarter.
It was missed opportunity for our freshmen team. I was proud of the effort that we displayed as a team. We will make sure that our kids are better conditioned and are prepared to play tough for an entire game.”—Coach Bart Oropeza
Up next
The freshmen Horses play at Warhorse Stadium next Thursday evening against San Antonio Legacy. Kickoff is set for 5:00pm.
By Jerel Beaty
Staff Writer