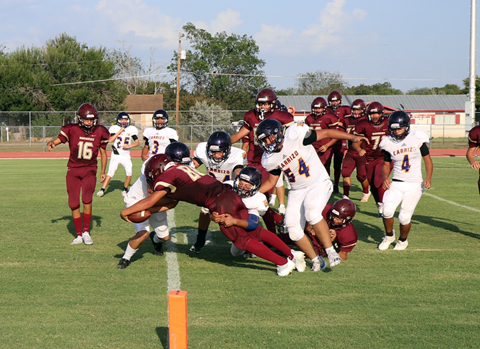 In a game not on the original preseason schedule, the Devine freshmen traveled over to Castroville for a Thursday late afternoon game. The Horses blanked Medina Valley 27-0 to go to 3-0 on the season.
“Brayden Reyes scored two quick touchdowns in the first quarter for us, which got the momentum rolling on our side early,” said offensive play caller Juan Gonzalez.
The first Reyes score came from a short one-yard run followed by a Matt Gomez two-point conversion to put Devine in the lead 8-0.
After a quick three-and-out by the Warhorse ‘D’, Devine got the ball to set up shop for their second score.
A nice run by quarterback Jacob Rodriguez set up a 3-yard Reyes, his second of the game. Joseph Stafford kicked the extra point for a 15-0 first quarter lead.
Tony Saldivar added his name to the scoring column on a hard, second quarter three-yard run. Saldivar’s touchdown boosted Devine’s lead to 21-0.
Late in the fourth quarter, Edward Perez scored from two-yards out. Perez’s touchdown came after quarterback Jacob Rodriguez completed three nice passes, setting up the final score of the game for either team.
“I was pretty proud of my Freshmen defense this past Thursday against Medina Valley,” said Coach Bart Oropeza. “We held their offense to zero points and that is the goal for our defense every week. This week will definitely be a good test for us and we are definitely looking forward to the challenge.”
Up next
Devine takes on Pleasanton Thursday at Warhorse Stadium. Kickoff against the Eagles is set for 5:00pm.
By Jerel Beaty
Staff Writer