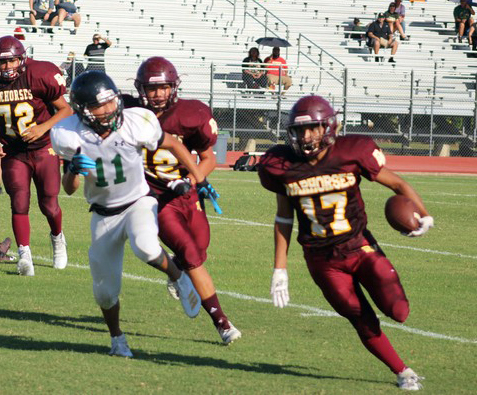 The Freshman Warhorses scored 38 points in route to beating the visiting San Antonio Southwest Legacy Titans by 18 points last Thursday in Devine. The Horses raced out to an early 22-7 lead, which held until the end of the ballgame.
Devine was actually behind in this game, although for a short time-frame. The Titans blocked a Warhorse punt and scored a touchdown two plays later to take a 7-0 lead.
Warhorse quarterback Jaiden Burford quickly answered with a 4-yard run, followed by a Marcus Rodriguez 2-point conversion run. Devine took the lead 8-7.
After recovering their squib kickoff, Rodriguez scored once more this time on a 2-yard run boosting Devine’s lead to 14-7.
On Devine’s last possession of the first half, Burford hit a streaking Rodriguez for a 20-yard touchdown pass. The Titans made it close going into halftime by scoring on a 31-yard pass late in the second quarter. Devine still led 22-14 at the break.
The Warhorses recovered yet another squib kick to begin the second half. Gabe Lopez scored on a 10-yard, and Ignacio Cisneros added the 2-point run. Devine was up 16 points at 30-14.
Cisneros put the finishing touches on the Warhorse victory with a 3-yard run in the fourth quarter. Lopez added the two-point run to close out all scoring.
Coach-speak
“Linebackers Nick Ortiz, Aaron Saenz, and Blain Davis all played well.”—Coach Scott Taylor
“I thought we did a much better job of playing hard for 4 complete quarters in this game. We were able to execute a couple of onside kicks, which gave us the opportunity to get back on offense and score. We look forward to working hard this week as we prepare to take on a tough Pleasanton team.”—Coach Bart Oropeza
Up next
Devine plays at Pleasanton on Thursday, September 19. Kickoff is set for 5:00pm.
By Jerel Beaty
Staff Writer