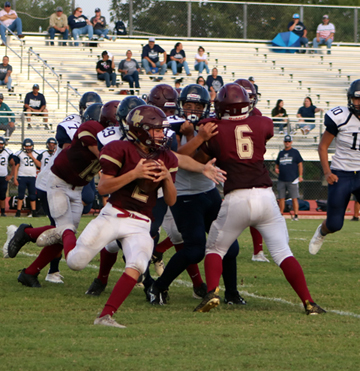 The Devine freshman squad shut out visiting Hondo 23-0 last Thursday evening. The Horses are now 2-0 in district play and take on the Bulldogs in Bandera this week.
Hondo kicked the game off to the Warhorses who wasted little time getting the ball into the end zone for six points. Running back Tony Saldivar put together a couple of nice runs to get the ball up to the 49-yard line. Quarterback Jacob Rodriguez hit tight end Matthew Gomez across the middle for a 21-yard gain. Gomez broke one tackle and steam-rolled another Owl on his way up the right sideline.
Ayden Leal ran for a 12-yard touchdown after Rodriguez picked up another 7 yards on a quarterback sweep. Saldivar converted the two-point run to put Devine up 8-0.
Rodriguez intercepted a Brayden Reyes tipped Hondo pass at their 48 and returned it all the way for the 52-yard interception return for a touchdown. The Horses ran a nice reverse pass from Saldivar who was the running back to Rodriguez who went from quarterback to receiver on the play for the two-point conversion, and the 16-0 lead.
Saldivar scored once more in the second half, bumping Devine’s lead to 22-0. A rare extra point sighting for a sub-varsity squad as Teotimo Stafford booted through the uprights the final point of the 23-0 whitewashing of the Owls.
By Jerel Beaty
Staff Writer