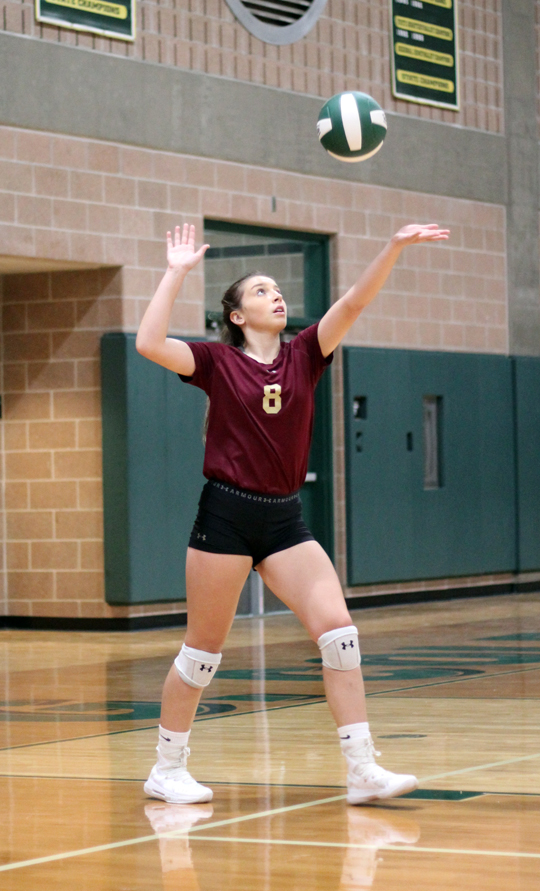 Friday night the Arabians won their first district game against Carrizo Springs in four sets. Each set was close and the Arabians won the first two sets 25-23 and 26-24 but dropped the third set 18-25. They fought hard in the fourth to win 25-21 and close the game out 3-1.
“This was a great way to start district. Even though we had serving and blocking troubles, the girls kept their heads in it and pushed to get this win. You could see that everyone was ready to do what the team needed them to do to get this win,” stated Coach Leigh Ann McIver.
Kills: Megan Runyan 14, Bailey Oropeza 6, Macey Hein 4, Janaee Wofford 2. Madison Pike 2, Jasmine Pompa 1. Aces: Allison Stevens 2, Myla Miles 3, Gabby Rodriguez 2, Destiny Moralez 2. Blocks: Wofford 2, Pike 2. Digs: Stevens 5, Runyan 12, Miles 12, Oropeza 12, Rodriguez 28, Hein 10, Wofford 29, Moralez 1, Pompa 9.
Elsewhere in the district on September 29th: Hondo beat Crystal City in 3 sets and Pearsall lost to Pleasanton in a non-district game. The Arabians will head to Pearsall on October 8th and then play Hondo at home Friday October 11th.
By Dicy Chambers
Sports Writer