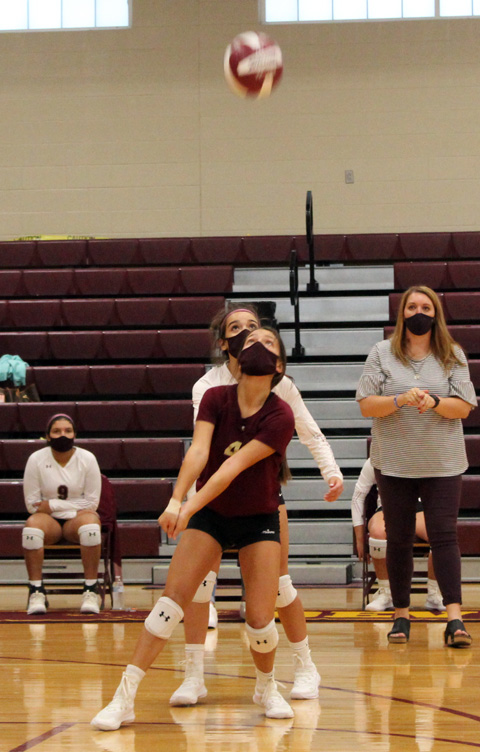 The Arabians fell to Antonian Prep on Tuesday night at 7-25, 12-25 and 15-25. Antonian forced their kills into the corners and attacked the ball through Devine’s blockers. The Arabian’s back row was able to keep the ball off the court several times but the Apaches played a stronger aggressive game.
“Even though we didn’t walk away with a win this game, I really think that we learned a lot and grew a lot. Antonian is a very good team and we haven’t seen anyone run that fast of an offense. We had some really great rally’s that didn’t end in our favor and we had our best serve receive game of the year.” Coach Leigh Anne McIver
Kills: Megan Runyan 5, Rylee Esquibel 3, Bailey Oropeza 1, Brianna Torres 1, Aleyna Gerlach 2. Digs: Runyan 3, Esquibel 8, Moralez 5, Oropeza 5, Darian Alvarez 2, Lacey Shook 1. Assists: Allison Stevens 4, Esquibel 7.
On Friday night, the Arabians hosted the Fredericksburg Billies and struggled to stop their aggressive front line. The Billies were able to find the holes in the Arabians’ defense. Devine dropped the first two sets 19-25 and 22-25 but fought back in the final set and took the Billies to extra points. They fell 25-27 but played a tighter defense in the third set to force a cleaner game.
Kills: Megan Runyan 6, Rylee Esquibel 10, Bailey Oropeza 6, Brianna Torres 1, Madison Pike 10. Aces: Runyan 2, Esquibel 1, Oropeza 1. Blocks: Darian Alvarez 2, Pike 1. Digs: Runyan 5, Kristina Moralez 10, Oropeza 7, Zoe Gonzales 1. Assists: Allison Stevens 12, Esquibel 13, Moralez 3, Oropeza 1, Pike 1.
The Arabian’s schedule is a little up in the air as most of their district has not started their volleyball season. Friday night the Arabians will play in Somerset and then against Feast (location to be determined). The rest of the season will be released week by week.
By Dicy Chambers
Sports Writer