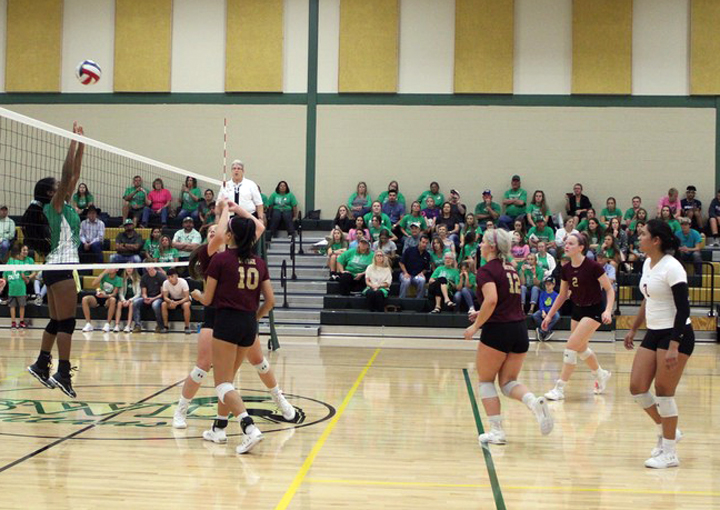 In the Bi-District play-off game against Pleasanton, the Arabians stepped up and played some of the best volleyball of the season. The Arabians worked hard the entire game but fell to Pleasanton in five sets.
Pleasanton took the first set 19-25 but Devine would not go away easily. The Arabians won set two 25-20 and then forced the third set to 24-26. Down 1 set to 2, Devine stole the fourth set 25-11 from Pleasanton to force a fifth set. The last set started out in Devine’s favor but Pleasanton soon took the lead and the game 11-15.
“Offensively we had a great night! But we just couldn’t pick up the balls that we needed to on the defensive end. Pleasanton played a great game and made plays when it really counted. We stayed in a lot of the rallies but just couldn’t finish them. These girls have been through a lot this year and they never threw in the towel. I am proud of them for that. I think they have learned a lot in these last four months that will carry on with them and they have grown tremendously on and off the court.” Coach Leigh Ann McIver
The Arabian starting line up in this play-off game was Aleyna Gerlach, Janaee Wofford, Megan Runyan, Madison Pike, Macey Hein, Bailey Oropeza, and Gabby Rodrigues as Libero. Allison Stevens, Myla Miles, Lacey Shook, Darian Alvarez, Brianna Torres, Cecilia Martinez, Leah Herrera, and Jasmine Pompa filled out the Arabian play off roster. Bella Gutierrez, Mackenzie McClellan, and Makayla Perez were the team’s managers.
The Arabians ended their season 15-25 and 6-2 in district and will come back stronger than ever next season. Pleasanton moved on to face Hidalgo and lost in three sets. Carrizo lost Bi-District to Navarro in three sets. Crystal City lost to La Vernia in three. Hondo beat Cuero 3-1. Orange Grove at Area 3-2. They played La Vernia for Regional Quarter Finals Tuesday night at Blossom Athletic Center.
Kills: Megan Runyan 26, Bailey Oropeza 8, Macey Hein 4, Aleyna Gerlach 3, Janaee Wofford 3, Madison Pike 13. Aces: Myla Miles 3, Hein 2, Leah Herrera 1. Blocks: Runyan 1, Oropeza 2, Hein 2, Gerlach 2, Wofford 3, Pike 6. Digs: Runyan 41, Miles 25, Oropeza 2, Gabby Rodriguez 29, Hein 22, Gerlach 6, Wofford 42, Herrera 2, Pike 6. Assists: Hein 50: Wofford 2.
By Dicy Chambers
Sports Writer