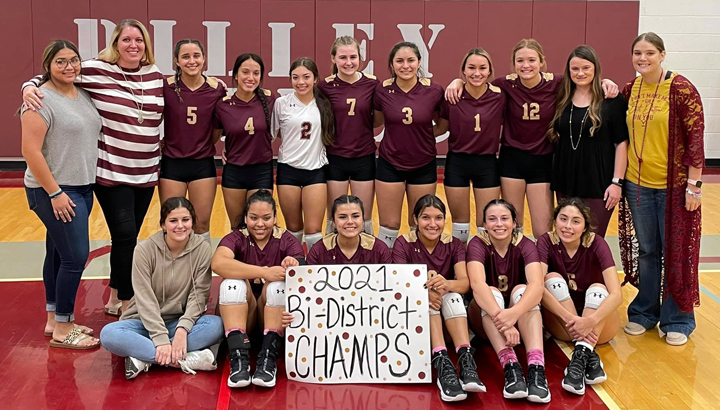 The Devine Arabians have advanced to the Regional Quarterfinals after beating Carrizo Springs in Bi-District and Alice in Area. They played Calallen in the quarter finals last night. With a win they will face La Vernia or Needville on November 12th. Calallen beat Hondo in the Area playoff game 3-2 and Gruella 3-0 in the Bi-District game.
In the Bi-District game against Carrizo Springs, the Arabians quickly took control of the game and found the holes in the Wild Cats defense. Devine won in three sets at 25-16, 25-14, and 25-23. Carrizo Springs took fourth in their district and end their season 3-5 in district. “The Bi-District Match tonight was not our best showing but we walked away with the win and that is what counts. We hadn’t played in a week and you could tell we were a step slow and not quit in sync. But the girls pulled it together to come back in the 3rd set and walk away with the win,” said Coach Leigh Anne McIver.
Avery Cruz 15 digs, 1 assist. Rylee Esquibel 12 kills, 2 aces, 1 block, 11 digs. Kristina Moralez 3 aces, 1 dig. Bailey Oropeza 3 aces, 6 digs. Darian Alvarez 1 kill, 3 digs. Brooklyn Miller 8 kills, 4 digs. Macey Hein 4 kills, 2 aces, 6 digs, 26 assists. Aleyna Gerlach 3 kills, 1 block, 8 digs. Skylar Blanton 2 kills, 1 block, 1 dig, Cece Martinez 1 ace, 2 digs.

In the Area match against Alice, the Arabians traveled to George West and came back with another win. Alice took third in their district and beat La Feria 3-0 in their Bi-District game. The Coyotes never got off the bus and lost to the Arabians in three sets. “The girls played great tonight!! They really came out with lots of intensity and excitement. We were way more active on defense and very aggressive on offense. Our passes were right where they were supposed to be so we were able to run our offense more efficiently,” added Coach McIver. Devine took the win at 25-15, 25-1, and 25-12.
Cruz 1 ace, 17 digs, 2 assists. Esquibel 17 kills, 1 block, 7 digs. Moralez 2 aces, 11 digs. Oropeza 5 digs. Alvarez 6 kills, 1 dig. Miller 4 kills, 1 dig. Hein 4 kills, 1 ace, 10 digs, 39 assists. Gerlach 9 kills, 1 block, 10 digs. Blanton 3 kills, 1 dig. Martinez 1 ace.
By Dicy Chambers
Sports Writer