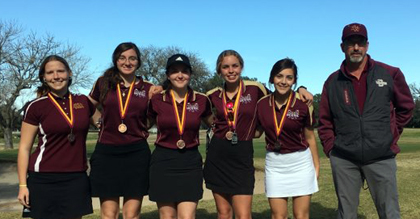 The Devine Arabian golf team teed off in Pleasanton last Monday for its second tournament of the young season. The Arabians placed second as a team with a 427, just behind champion Hondo who shot a 421.
Emily Faubel tied the Owl’s Mallory Matthews for the individual championship with each player posting a 76 but received 2nd Medalist overall due to the tiebreak on their score on hole number 9, which is the course’s toughest handicap. Emily scored a par while Mallory putted in for birdie.
Sidney Weyel shot a 112 and Raynee Allen swung her way to a 119. Lillian Steele shot a 120, Reese Duncan a 121, and Lindsey Herrera had a 131 to complete the Arabians scoring output.
Coach Mark Mangold liked the improvements made from each of his golfers stating, “We were 15 strokes better than our last time out and could drop another 25 just on the greens alone with a little extra work.”
By Jerel Beaty
Staff Writer