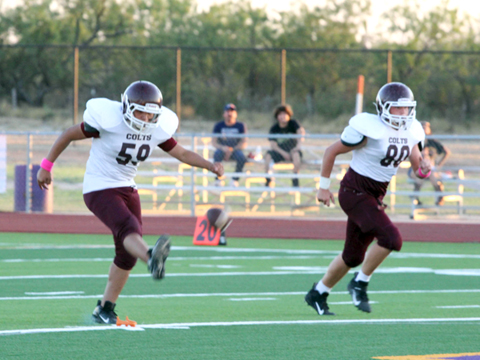 Devine’s 8th grade Colts opened district action with a 28-12 victory over the Wildcats in Carrizo Springs last Thursday. A 6-6 tie going into halftime quickly swung in Devine’s favor as they came out the more determined team in the second half.
“Carrizo came out big, tough, and fast and we really weren’t ready for them to be that physical and it took a while to get settled,” said Coach Lon Cozby. “Our offensive front figured it out and our run game started to take over after halftime.”
A back-and-forth first quarter tug-of-war in which neither team could punch the football into the end zone finally saw the Colts get into the end zone.
Devine defensive lineman Derek Traylor laid a big hit on a Wildcat back to jar the ball loose. Teammate Jackson Hagdorn jumped on the fumble to give the Colts possession, and momentum.
After good runs by Colt running backs Joe Guerrero, Cole Davis, and Christian Monreal, quarterback Karter Brown hit wideout Mason Beaver in the back of the end zone for a 22-yard touchdown reception to put Devine up 6-0.
“The forced defensive turnover gave us a spark, and we capitalized on our next offensive possession,” Cozby continued. “We got into our hurry-up offense and Carrizo’s defense started to come up to stop the run. That’s when we were able to open up our passing game and score through the air.”
Carrizo Springs quickly answered the call with a 54-yard touchdown run by their quarterback. Colt Ty Sadler was able to stuff their two-point conversion to keep the score knotted at six going into halftime.
The Wildcats received the second half kickoff and were on the verge of having a big run when they fumbled the ball. Colt Jesus Torres recovered to give Devine possession and another chance to score.
“After Torres’ recovery, we put together a few more tough runs to set up another touchdown pass and catch from Brown to Mason Beaver,” Cozby said about the momentum changing touchdown throw. Joe ran in the two-pointer, giving Devine a 14-6 lead.
Devine’s defense came up huge again on the next Wildcat possession as they forced a three and out and a Carrizo punt that Hagdorn may have gotten a hand on.
Cozby described the action saying, “Jackson put pressure on the punter and we think he might have gotten a hand on it because the ball only went to the line of scrimmage. Trystan LaFond grabbed it out of the air and ran it back to the 15 yard line.”
Mario Vicente ran it up the middle untouched for a touchdown the play after LaFond’s return to boost Devine’s lead to 20-6 as the conversion pass attempt from Brown to Briar Parson was not successful.
The 20-6 lead was short lived due to a 48-yard fumble return for a touchdown by Carrizo Springs that closed the gap to 20-12 going into the final quarter.
Late in the fourth quarter, Guerrero found some room off a huge block from Lucas Rodriguez that was good for a 33-yard gain that put the ball on the one-yard line.
“Behind some great blocks from Trystan and Jackson, Karter punched it in and Ryan Weinkam added the conversion to give us a more comfortable lead,” Cozby said about the game’s final touchdown that closed out the 28-12 victory.
“This tough game was a good eye opener for our guys because I think we were overlooking Carrizo after the big win against Navarro the previous ballgame,” reflected Cozby. “Well, now we have Hondo and if we can’t get hyped for them, then we probably don’t need to live in Devine!”
Cozby sets lofty expectations for all of the teams he coaches, and he sets the bar high for this team as well.
“This 8th grade has a goal to be undefeated district champs and we have one down on our way to that goal. We just need to keep bringing it week in and week out,” Cozby said in closing.
Up next
The Colts look to clip the Owls in Hondo on Thursday, October 14.
By Jerel Beaty
Staff Writer