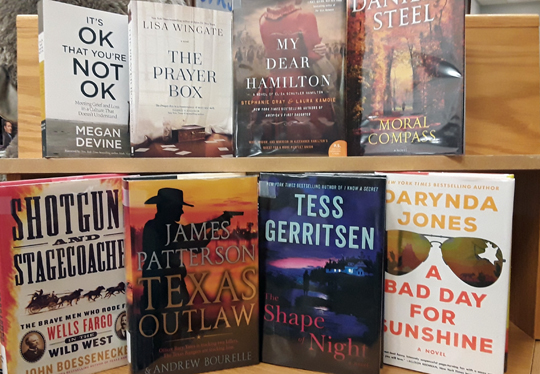 Are you growing weary of reading the same old thing? Do you need to escape the everyday humdrum? Well, have we got just what you need. This week we are highlighting some of our adult fiction/nonfiction collection. If you don’t see anything that interest you check our whole collection out online at: https://driscoll.biblionix.com/catalog/. If you are interested in viewing what’s new at the library click on the “what’s new” tab in the right hand corner of our online catalog. We are also always available to help you by phone at 830-663-2993.
It’s Ok That You’re Not Ok by Megan Devine – Featured on NPR’s RADIO TIMES. 1200+ 5 star reviews. When a painful loss or life-shattering event upends your world, here is the first thing to know: there is nothing wrong with grief. “Grief is simply love in its most wild and painful form,” says Megan Devine. “It is a natural and sane response to loss.”In It’s OK That You’re Not OK, Devine offers a profound new approach to both the experience of grief and the way we try to help others who have endured tragedy.
The Prayer Box by Lisa Wingate – When Iola Anne Poole, an old-timer on Hatteras Island, passes away in her bed at ninety-one, the struggling young mother in her rental cottage, Tandi Jo Reese, finds herself charged with the task of cleaning out Iola’s rambling Victorian house.Running from a messy, dangerous past, Tandi never expects to find more than a temporary hiding place within Iola’s walls, but everything changes with the discovery of eighty-one carefully decorated prayer boxes, one for each year, spanning from Iola’s youth to her last days.
My Dear Hamilton by Stephanie Dray & Laura Kamoie– the epic story of Eliza Schuyler Hamilton–a revolutionary woman who, like her new nation, struggled to define herself in the wake of war, betrayal, and tragedy. In this haunting, moving, and beautifully written novel, Dray and Kamoie used thousands of letters and original sources to tell Eliza’s story as it’s never been told before–not just as the wronged wife at the center of a political sex scandal–but also as a founding mother who shaped an American legacy in her own right.
Moral Compass by Danielle Steel – In this compelling novel, Danielle Steel illuminates the dark side of one drunken night, with its tragic consequences, from every possible point of view. As the drama unfolds, the characters will reach a crossroads where they must choose between truth and lies, between what is easy and what is right, and find the moral compass they will need for the rest of their lives.
Shotguns and Stagecoaches: The Brave Men Who Rode for Well Fargo in the Wild West by John Boessenecker – True stories of Wild West heroes who guarded the iconic Wells Fargo stagecoaches and trains, battling colorful thieves, vicious highwaymen, and robbers armed with explosives.Armed with sawed-off, double-barreled shotguns and an occasional revolver, these express messengers guarded valuable cargo through lawless terrain.
Texas Outlaw by James Patterson – A Texas Ranger is justice until he sidesteps the law.Texas Ranger Rory Yates is not keen for hero status. But it’s unavoidable once his girlfriend, country singer Willow Dawes, writes a song about his bravery. Rory escapes his newfound fame when he’s sent to the remote West Texas town of Rio Lobo, a municipality with two stoplights. And now, according to the Chief of Police, it has one too many Texas Rangers.(book 2 in A Texas Ranger Thriller series).
The Shape of Night by Tess Gerritsen – A woman trying to outrun her past is drawn to a coastal village in Maine—and to a string of unsolved murders—in this novel of romance and psychological suspense. After an unspeakable tragedy in Boston, Ava Collette flees to a remote village in Maine, where she rents an old house named Brodie’s Watch.In that isolated seaside mansion, Ava finally feels at peace . . . until she glimpses the long-dead sea captain who still resides there.
A Bad Day for Sunshine by Darynda Jones – Del Sol, New Mexico is known for three things: its fry-an-egg-on-the-cement summers, strong cups of coffee―and, now, a nationwide manhunt? Del Sol native Sunshine Vicram has returned to town as the elected sheriff―thanks to her adorably meddlesome parents who nominated her―and she expects her biggest crime wave to involve an elderly flasher named Doug. But a teenage girl is missing, a kidnapper is on the loose, and all of this is reminding Sunshine why she left Del Sol in the first place. Add to that the trouble at her daughter’s new school and a kidnapped prized rooster named Puff Daddy, and, well, the forecast looks anything but sunny.
What’s Up @ the Library
The library remains closed to the public until further notice. Any changes will be posted to the city website and the Friends of the Library Facebook page: https://www.facebook.com/devinelibrary/
We do offer curbside service for material check out and printing services. To place an item on reserve call us at 830-663-2993 or sign in to our online catalog at: https://driscoll.biblionix.com/catalog/
All material returned to the library is to be placed in the curbside collection box. Each item returned is placed in quarantine and sanitized before returning to circulation.
FREE WIFI – in the parking lot of the library: connect to: LibraryWifi password: DPL1234 (for best reception park close to the library or on the railroad side of the library).
We also have our digital library available to all our patrons at https://lonestardigitalibrary.overdrive.com/account
For printing services you can email your item to us and we will print it for free. Email: driscoll.library@gmail.com
To apply for a library card or general information call the Driscoll Public Library 830-663-2993 our hours are Monday-Friday 10 am – 6 pm.
Summer Reading Challenge has been extended through the month of August so children age 5 -18 years still have plenty of time to participate. We have some really great prizes this year. For more information call the library.

Devine vs Hondo has championship feel