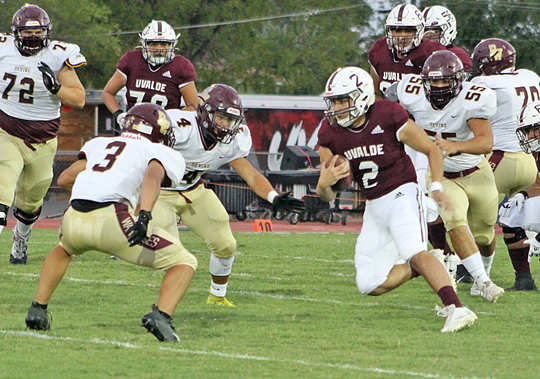 Devine looks to keep the ball rolling Friday night as the Warhorses look for win number 2 of the season against the visiting Universal City Randolph Ro-Hawks. Devine enters the game after an exhilarating 49-48 victory over the Coyotes in Uvalde.
After taking last week off, Randolph plays its second game of the season after a dominating 28-8 victory against Harper on opening night.
The Ro-Hawks dismantled the Longhorns via their strong running attack. Lezerrick Banks carried 11 times for 195 yards (17.73ypc) and two touchdowns.
Overall, Randolph rushed for 337 yards on 43 attempts, scoring all four touchdowns on the ground and amassing 21 first downs. Colton Howard (12 for 67) and Padwa Nunez (4 for 30, 1 TD) shouldered the rest of the carries for the Ro-Hawks in a game that was never really in doubt as Harper scored their lone touchdown with 3:06 left in the game.
Lezerrick’s speed and agility will give Devine’s defense a good test in open-field tackling.
Gomez’s take
We have a very fast Randolph team coming to town on Friday. Randolph runs the wing-T and they definitely have a talented backfield. Running back Lezerrick Banks (5-11 185lbs. 4.5 40yd) is not only a really good back but also an excellent LB that had 153 tackles for the Ro-Hawks last year.
Banks is a tough running back with break-away speed. Fullback Colton Howard is also fast (4.4 40yd) and not your typical fullback. He reminds me of our own Buddy Santos.
Another running back Tre’Von Moore (5’6 170, 4.5 40yd) is also an excellent RB that also starts on the D-side. Their backups are also fast and run the ball well.
It will definitely be another good test for us and our guys are excited for the opportunity.

Defensively, they are a split team and are very well coached. They play good technique and are very sound defensively. They have a lot of guys that play both ways just like us so we are very similar in that manner.
We put our heads down and get back to work on Monday. I told the kids that there was a reason why we won last week and it was because we had a really good week of practice. Our energy was high and effort was great.
That’s the key to success.
What’s in a name
Warhorse and Ro-Hawk football are not common opponents but one thing they do share is great and unusual mascots. The following is straight from Wikipedia.
Randolph High School, part of the Randolph Field Independent School District, is located on Randolph Air Force Base in Universal City, Texas, a suburb of San Antonio. It serves approximately 470 high school students and employs approximately 40 high school teachers and other support staff. Randolph High School was established in 1962, and was the first high school located entirely within an existing Air Force Base.
The school prides itself that its mascot, the “Ro-Hawk”, is the only mascot of its kind in Texas and the United States. Ro-Hawk is a combination of the words rocket & hawks.
The image is a hawk riding a rocket with a lightning bolt clenched in its talon. Rumor has it that upon opening the school the school board could not decide on a mascot. Half of its members wanted Rockets, which was already in use by nearby Judson High School, and half wanted Hawks, to keep with the Air Force Academy’s use of bird mascots (Falcons). So, as a compromise, Ro-Hawks was selected
Looking back
Randolph finished their 2019 campaign at 8-4. Finishing 3rd in District 14-3A DI, the Ro-Hawks defeated Mathis 42-13 in bi-district before bowing out of the state playoffs a week later to the Columbus in a close-fought game 21-16.
Looking ahead
After facing Devine, Randolph plays Wallis Brazos at home on September 11.
By Jerel Beaty
Staff Writer