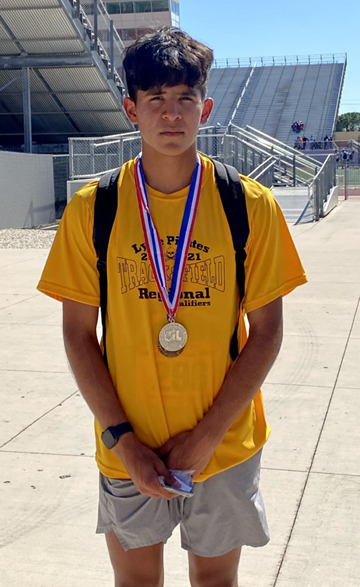 Lytle Pirate 1600m runner JoseCarlos Hernandez punched his ticket to State in the 1600m Run with a personal-best 4:34.68 effort. Hernandez won the silver medal finishing a little over two seconds behind regional champion Wyatt Hoover of Poth who posted a 4:31.87.
Hernandez is the first Lytle track and field athlete to advance to State since 2016.
Lytle scored 17 points as a team to place tied for 14th overall with Bishop and Marian. Hernandez’s state-qualifying performance netted eight points while his bronze medal, third place 3200m Run earned the Pirates another six points. Robert Wagner placed fifth in 800m Dash to get two points and Cort Haltom was sixth place in Discus to add a single point to the Pirate total.
“Cort Haltom and Alex Medina both qualified for the finals with their first throw,” stated thrower’s coach Hadley Foster, Jr. “Alex was also attempting to set a new PR for himself in every meet but fell just short.”
Cort finishes the year as the district and area champion, and Foster looks forward to both Cort and Alex qualifying for State in 2022.
State info
Jose Carlos Hernandez will run at Mike A Myers Stadium in Austin on Thursday, May 6. The 3A girls run the 1600m at 7:50pm followed by Hernandez and the rest of the boy 3A qualifiers run directly after the girls.
Best of luck at State!
Footsteps
JoseCarlos Hernandez follows in the footsteps of other terrific Lytle track and field athletes who have competed on the state’s biggest stage since 2006. Coach Gilbert Ruiz provided the following information on past state qualifiers:
2006 400m Andrew Massey, 2007 800m Jeremy Juarez, 2008 4x200m Clayton Jopling, Julian Martinez, Shawn Pringle, and Steve Piazza, 2009 800m Sebastian Benavides, 800m and 1600m Brandon Lacy State Champion, 2010 3200m Sebastian Benavides, 800m Brandon Lacy State Champion, 2011 3200m Sebastian Benavides, 800m Brandon Lacy State Champion and1600m, 2012 3200m Cesar Gonzalez, 1600m Adrian Valdez, 2013 3200m Cesar Gonzalez State Champion and 1600m, 2014 3200m Jethro Stokes, 3200m and 1600m Natalie Cortez, 2015 1600m Jethro Stokes, 2016 400m Christian Cedeno, and now 2021 1600m JoseCarlos Hernandez.

Grateful coach speak
Thrower’s coach Hadley Foster, Jr. emails a “Lessons from the Ring” after each meet to all Lytle ISD employees recapping how his athletes performed in their most recent meet, and he includes quotes from various sources from which he and others can interpret and take from it what they choose.
After personally reading these “Lessons” throughout the season, it is obvious that Coach Foster cares greatly for not only all of his throwers but for all who perform duties within the school district as he takes time to thank the maintenance department for keeping the fields nicely mowed and maintained, Mrs. Conover for allowing (him) to borrow her field of play, Armando and the transportation department, cafeteria (personnel) for meals, Mrs. Stewart for arranging for substitutes, and thanks to Coach Ruiz and Coach Scotello for allowing him to perform his duties with complete trust.
Below is the last quote that Coach Foster forwarded in his “Lessons from the Ring”. It is from Papyrus Old Egyptian Historical papers that I believe is fitting for not only all teachers, coaches, and all other school personnel and this school year comes to a conclusion but for everyone no matter their job title or profession. I think we can all learn from it, and thank you, Coach Foster for the time you take in recognizing the student-athletes in your program!
“If you can’t get enthusiastic about your work, it’s time to get alarmed—something is wrong. Compete with yourself. Set your teeth and dive into the job of breaking your own record. No one keeps enthusiasm automatically. Enthusiasm must be nourished with new actions, new aspirations, new efforts, and new vision. It is one’s own fault if enthusiasm is gone for he/she has failed to feed it. If you want to turn hours into minutes, renew your enthusiasm.”
Team standings (Top 16)
1st Universal City Randolph 52, 2nd Lago Vista 50, 3rd Vanderbilt Industrial 44, 4th Goliad 41, 5th Llano 39, 6th Yoakum 28, 7th Natalia 27, 8th San Diego and Corpus Christi London 26, 10th Palacios 23, 11th Poth 21, 12th Progresso and Great Hearts Northern 20, Tie 14th Lytle, Bishop, Marion 17.
Pirates
1600m Run (F)—2nd JoseCarlos Hernandez 4:34.68, 11th Gregorio Alcorta 5:00.02 1600m Run (F)—3rd Hernandez 9:58.12 800m Dash (F)—5th Robert Wagner 2:06.90 Discus (F)—6th Cort Haltom 134’0”.
By Jerel Beaty
Staff Writer