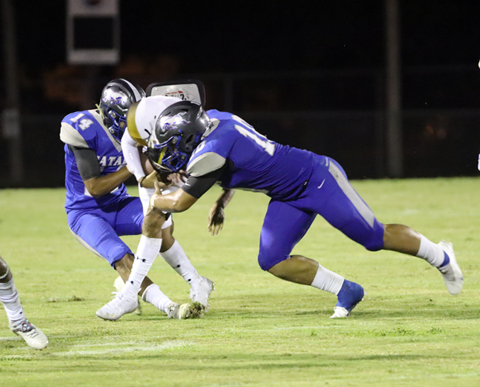 The Natalia Mustangs (1-1) will welcome old time rivals Dilley (0-2) to Mustang Stadium Friday night for a unique week-3 District opener which also happens to be Natalia Homecoming.
Natalia is coming off a win vs. rival Lytle, as the Wolves enter Friday Night’s battle with their second straight loss at the hands of 2A Rocksprings.
Just like Lytle, normally you can toss out records when these two ball-teams battle, as things are usually quite physical and at times even a bit on edge.
Dilley Outlook
The Dilley Wolves are coming off a tough 0-10 season from a year ago and have not had the best of luck so far this season with two tough and slightly disappointing losses in a row.
Dilley began the season with a loss to a Sabinal squad who has a new head coach along with a team who also finished 0-10 a season ago. The Jackets beat the Wolves, 24-6. Last week, the Wolves fell to Rocksprings (2-0) in a much closer and better fought game 30-20.
“Dilley is much like Lytle, they are much improved from a season ago,” Natalia Head Coach Ilyan Martinez said. “Right now, they are searching for an identity on offense and that will create some issues as far as preparation goes. We will have to be prepared for all things under the sun when it comes to their offense.”
“Defensively, they are very athletic and can cover a lot of ground in a hurry.”

According to Coach Martinez, the Dilley QB (Cristian Aranda) is very fast and athletic. “We will have to find a way to get the ball out of his hands and contain him. He also plays free safety and will limit you on your big play abilities.
A season ago, Natalia romped past Dilley as everything went Natalia’s way in a 71-0 victory over the Wolves which was believed to be the most points ever scored by a Natalia team.
Two seasons ago however, Natalia was missing in action offensively as the defensive grid-lock ended with a 6-0 victory by the Wolves in Dilley.
Natalia Outlook
In order for the Stangs to be successful during their district opener, Natalia simply needs to take care of Natalia. They will need to contain a QB who has similar ability as the Lytle QB and be patient offensively.
The Stangs will also need to limit turnovers and costly penalties as well.
“I think we need to be more consistent in our play and get back to the basics and do what we do,” Natalia Head Coach Ilyan Martinez said. “We need to trust each other to do their job and when our number is called, we need to produce.”
Homecoming 2020
The Homecoming Clubs will be recognized prior to the start of the game most likely between 6:30-6:45 p.m. (see Natalia ISD Social Media Sites for exact times) with the Homecoming Court festivities during half-time of the game.
Tickets went on sale this past Tuesday morning online and will not last long as the 50% capacity ruling remains in affects for stadiums in Texas per UIL.
Come out, be loud, wear blue and cheer on Natalia as they host the Dilley Wolves at 7:30 p.m. #TTP #MakeChiliOutOfDilley
By Eric Smith
Staff Writer