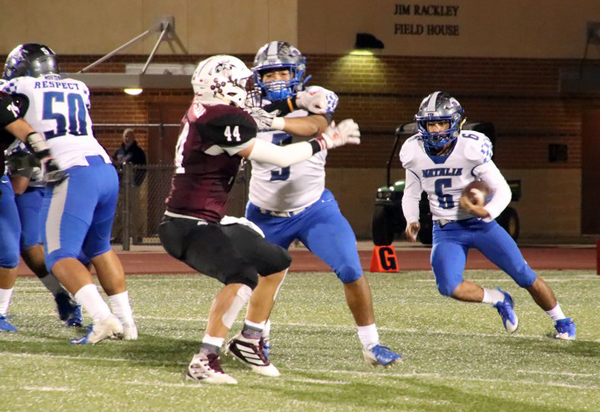 The Natalia Mustangs battled in the Class 3A Area Playoffs last Friday night at Judson ISD’s J.W. Rutledge Stadium. This was the first time since 2002 Natalia had advanced to the Area Round of the football playoffs.
Natalia knew going into their battle vs. the #1 team in Region IV and the #2 team in the state East Bernard, they would have to play near perfect to have an opportunity to win.
The Stangs came out and played phenomenal on their first three offensive drives, but missed opportunities proved costly, as East Bernard took advantage en route to a 41-7 victory over Natalia.
“East Bernard’s philosophy on defense is to bend, don’t break,” Natalia Head Coach Ilyan Martinez said. “When you get into the red zone, it becomes really difficult to score, because of their ability to close in a hurry. When you put that together with a reduced field to cover, they thrived in the situation, but we just didn’t make the plays we needed to.”
East Bernard won the toss and elected to defer which meant the Natalia offense had their first chance to strike. Natalia got the ball at their own 28 yard line after the kickoff. Natalia was able to find success early, thanks to runs by Adrian Vasquez, a pass from Wyatt Woodson to Evy Curiel as well as runs by Diego Zapata, Woodson and Vasquez which marched Natalia down to the East Bernard 37 yard line. Unfortunately, Natalia stalled out on 3rd and 4th and 3 although there was a missed opportunity on the 4th down play where a lane was open turning the ball over on downs. During this drive, Natalia had a missed opportunity on a missed tipped pass that could have gone for a Natalia touchdown.
East Bernard got the ball with 9:29 to go in the opening quarter. They needed five plays to score on a Kameron Matthews 29 yard run. The PAT was good, as the #2 Brahmas led 7-0 with 7:40 to go in the 1st quarter.
Natalia got the ball back at their own 27 for their second drive of the game. This is when Natalia truly had an impressive drive. Natalia used another good mix of passes and runs to march down field where Natalia on their 12th play of the drive had 1st and goal at the East Bernard 10 yard line. After a Woodson run, the Stangs were at the EB 8 yard line before watching Adrian Vasquez run for a 5 yard gain getting the Stangs to the 3 yard line. Unfortunately, a holding call marched Natalia back to the 16 yard line. One play later, Natalia was called for a false start pushing them back to the East Bernard 21 where Natalia had 21nd and goal. Unfortunately, Natalia would stall out and come up empty on a crucial drive, one that would cost the Stangs a ton of momentum.
East Bernard got the ball back at their own 14 yard line, but the Natalia defense rose to the occasion forcing a 3 and out which had the Natalia faithful on their feet.
Natalia got the ball back at their own 25 yard line with 1:13 to go in the opening quarter. Unfortunately, Natalia stalled out and was forced to give the Brahmas back the football. A great punt return by EB allowed them to start at the Natalia 46 yard line. Six plays later East Bernard scored on their second touchdown, thanks to a Devin Chapman 1 yard run with 8:59 to go in the first half. The PAT was good as they led 14-0.
Natalia had one more true offensive opportunity and it came later in the second half when Natalia opted to go for a fake punt on 4th and 12 from their own 41 yard line. The play was open, but the pass and reception was just a tad off which truly shot down any true hopes of Natalia making this a game. Had the ball been caught, there was nothing but open ground proving why this was the right play call.
The Brahmas were able to score one final time on a Dallas Novike pass to Carson Little with 21 seconds to go in the first half. This allowed East Bernard to march into the half with a 21-0 lead.
Despite the score, the Brahmas held a slight edge at the half when it came to offensive stats with 162 yards compared to 153 by the Stangs.
In the second half, Natalia never could provide a solid offensive drive as there were spurts of greatness, but nothing that would produce until the end of the contest.
East Bernard was able to take advantage and score three final times with one touchdown in the 3rd quarter and two more in the fourth allowing them to hold a 41-0 advantage.
With 7 seconds left in the game, Natalia was at the East Bernard 17 yard line and was faced with 3rd and 4 with 7 seconds left in the game. Natalia’s Wyatt Woodson was able to drop back and find Diego Zapata in the endzone for a 17 yard strike as time expired. The PAT was good, as the Stangs would bow down to #2 East Bernard 41-7 in the Area Playoffs. 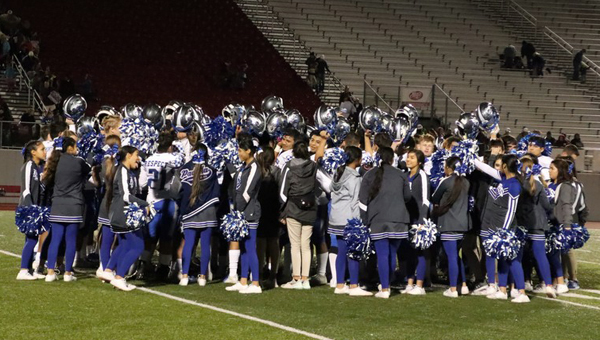 Games are obviously won on the scoreboard, but it is no secret Natalia fared well on the stat side of things despite the score. Natalia held East Bernard to 349 yards of offense and had more success versus their defense than the majority of the teams they had faced. Natalia produced 289 yards of offense that included 162 passing and 127 rushing.
“I was happy with how we were able to move the ball,” Martinez said. “I am disappointed we couldn’t get on the scoreboard early. I think that would have changed the momentum of the game. We knew they were one of the best teams in the state and when we missed our opportunities and they jumped out ahead of us, we started to press a little. Overall, I am proud of our kids.”
Final Stats: Out of the 349 yards for East Bernard, 62 came thru the air and 287 on the ground. Natalia and EB finished with 16 1st downs each as EB had 2 turnovers in the game and Natalia had 0.
Wyatt Woodson finished the game 20-36-162-1TD as he also led rushing 24-76. Jacob Jass was next in line rushing 10-26.
For EB, Novicke was 3-8-62-1TD-1INT as Kameron Matthews had 9 rushes for 141 yards-1TD. Receiving for Natalia, Xavier Vasquez led 9-85 as Evy Curiel had 7-47.
Final Thoughts
Natalia came out and had their chances to truly leave their mark and make this a game, but it simply did not happen, but it was not because a lack of effort or coaching. Sometimes when you face great teams, they find a way to prevent you from getting to the finish line per se and this was simply the case.
“I think we showed up and competed as hard as we could,” Martinez said. “We just didn’t get any breaks and that is the way it goes sometimes.”
Defensive Thoughts
“Obviously I am never happy giving up the points we did, but I felt we had a great game plan and played them as tough as anyone else,” Martinez said. “Defensively, we played on a short field for a few of those TDs and that is always tough to do against a good offense. We had some busted assignments and they were able to expose them. Overall, I am proud of how we competed.”
A great season
This Natalia squad is one of just five to make the playoffs since 1989 and aside from the 2017 squad, the best overall record squad since 1989 with an 8-4 overall record. This squad was also just the second squad since 1989 to make it to the area round of the playoffs.
“I could not be happier with our kids and coaches,” Martinez said. “We had to overcome a lot of adversity this season and our kids showed a great deal of maturity. I think the success we had throughout the year was a byproduct of continuing a culture being built here. We have great buy-in from our kids and it continued to show year in and year out as we build this thing up. I am excited about the future and proud of where we come from.”
Thank you Seniors
Natalia will say good-bye to the following seniors: Isaac Martinez, Michael Martinez, Jacob Jass, Diego Zapata, Saul Valadez, Evy Curiel, Reece McDole, Diego Hernandez, Jeremiah Gomez, Uriel Arellano, Nick Vasquez, Paul Billalobos and Matthew Manka.
“This is a really special group of seniors,” Martinez said. “They led all year long selflessly. They were all team first guys and were great in every role we asked them to fill. When you’re building a team, the senior class is the glue that puts all of the pieces together. They set a great example for the rest of our kids and were a big part of our success.”
Next week, we will take a look at what Coach Ilyan Martinez has to say about going into the off-season, his thoughts on next season and final thoughts on this season that just concluded.
East Bernard will advance to the third round where they face the Comfort Bobcats this coming Friday, November 29th at Memorial Stadium in Bastrop at 1:30 p.m. The other 3A, Division II battle includes Poth vs Ganado at Cuero Friday at 2:00 p.m.
In Class 3A, Division I George West battles Hallettsville at 7:30 p.m. at Farris Stadium in San Antonio as Industrial and Columbus will battle at 12:00 noon in the Alamo Dome this Friday as well.
By Eric Smith
Staff Writer